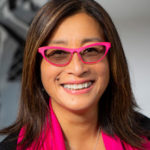 Villy Wang is the visionary founder of Bayview-Hunters Point Center for Arts and Technology (BAYCAT), a social enterprise nonprofit that trains low-income youth, young people of color, and young women from underserved Bay Area communities to compete for creative jobs in the digital economy. Since 2004, more than 4,000 young people have studied at BAYCAT, with 80% of internship graduates going on to careers at Lucasfilm, Pixar, SF Giants, Golden State Warriors Studio, HBO, Netflix, Wired and other top companies.

Villy grew up in New York City public housing, raised by a single mother who spoke no English when she immigrated from China. Villy’s mother put herself through night school, eventually graduating from the Fashion Institute of Technology and opening her own garment factory. Villy credits her mother for inspiring a deep conviction that “education plus entrepreneurship equals hope and new beginnings.” After a 25-year career in banking, law, education, media, arts and nonprofit management, she founded BAYCAT as a social enterprise to empower youth who grew up in similar circumstances.  Villy is President of the San Francisco Film Commission, a Bay Area Jefferson Award winner, a TED Speaker, and one of SF Business Times’ 2017 Most Influential Women in Bay Area Business. She holds a double B.A. in engineering and economics from Brown University, and a J.D. from Northwestern University.

On the 15th anniversary of BAYCAT, Villy is thrilled to have the chance to rest, reignite her creativity and ponder how she will further execute her dream of making BAYCAT “the Harvard of media schools and the go-to studio for socially-conscious clients.” While on sabbatical, she plans to travel to China, where her beloved late-mother was born. She’s also looking forward to recharging physically, mentally and spiritually by experiencing the rare joy of schedule-less days, and through ceramics, music and writing.

“I’ve learned the hard way that it’s essential to take care of yourself in order to model true leadership and give back,” Villy says. “I’m thrilled that my O2 sabbatical will allow me to do that.” While she’s away, her strong BAYCAT team will become even stronger by taking on new leadership roles.