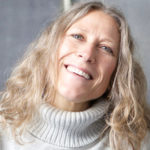 Lisa Steindler is Executive Artistic Director of Z Space, which is nationally-recognized as a leading laboratory for new voices in American theatre. As advocates for artistic risk and collaboration among artists and audiences, Lisa and Z Space stage bold, new work and incubate artists and playwrights who explore innovative boundaries. In the Bay Area, Z Space is a stable home for many dance and theatre companies that might otherwise be displaced by the region’s notoriously high costs.

For more than ten years, Lisa has guided Z Space’s tremendous growth, doubling the organization’s budget and creating a hub for local and national artists and audiences. Formerly Artistic Director of Encore Theatre Company and creator of American Conservatory Theater’s Bay Area public school program, Lisa joined Z Space as Director of New Plays in 2005 before becoming Executive Artistic Director in 2008.  In 2009, she secured the organization’s first dedicated home, an historic 250-seat San Francisco arts venue. After annexing a second theater, now known as Z Below, Z Space is a 16,000-square-foot home for inspiring, transformative art. Lisa serves on the board of the Zellerbach Family Foundation and is a member of the Actors’ Equity Association and Screen Actors Guild-American Federation of Television and Radio Artists. She holds an M.F.A. from the American Conservatory Theater.

Lisa is a dedicated mentor who shares her spirit of generosity and optimism with artists of multiple disciplines. During her sabbatical, she’ll have a chance to direct some of that energy inward. She intends to revitalize by spending time with family and nourishing friendships that will sustain her work into the future. She plans to read more, and to dust off her captain’s license and engage in her favorite pastime, sailing. She’s also excited about letting other members of Z Space’s distributed leadership team take charge during her absence.

“As Z Space celebrates 25 years in the arts community,” Lisa says, “it’s essential that our entire leadership team is empowered to make creative decisions and take risks so that Z Space can move forward for the next quarter-century. Art can create new lenses to help people see and process their world. It can change your perception of your surroundings, yourself and others. I look forward to enabling the next tier of Z Space’s leadership to help us do that with fresh and brave vision.”