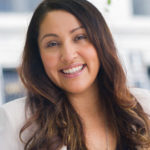 Cristy Johnston Limón is Executive Director of Destiny Arts Center, a transformative Oakland organization that inspires and ignites social change through the movement arts for Bay Area youth.  In 2011, Cristy’s first charge as Executive Director was to lead an organizational turnaround and relocate Destiny Arts Center’s inadequate facility.  Cristy directed a three-year fundraising campaign before purchasing a vacant space in North Oakland, turning it into an artistically rich, welcoming cultural destination.  Destiny Arts Center is a home away from home for young people, serving thousands of youth and their families each year and helping them grow into global citizens and advocates for social change.

Cristy is the former Founder and Executive Director of Excelsior Action Group (EAG), a San Francisco-based community development organization credited as one of the “17 points of economic opportunity” in San Francisco.  She previously served as Legislative Aide/Senate Fellow for California State Senator Martha Escutia and has expertise in public policy and the state budget, focused on protecting funding for children and families, housing and human services.  She is the 2015 Young Nonprofit Executive Director of the Year and 2014 Northern California Community Loan Fund Community Impact Awardee.

A San Francisco native who grew up in the Mission district, Cristy is a bilingual Guatemalan-American and first in her family to graduate from college.  She received her B.A. in Political Science from UC Berkeley and MBA from UC Berkeley’s Haas School of Business, exploring the role of business in promoting philanthropy, culture, and equity.

Cristy started her career at the age of nineteen and has been working in policy, community development and social justice ever since, with hardly a break.  The mother of a three-year old, her daughter was born shortly after Destiny Arts Center’s new facility opened.  Cristy has spent her career nurturing others in her community and organizations and now is Cristy’s time to re-energize and recommit to her life’s work.  “Leadership development for long-term organizational stability is a key priority and I am proud that my team is poised to lead while I am on sabbatical.”

Cristy plans to spend her sabbatical reading, writing, travelling, playing with her daughter, attending a yoga retreat and meditating.

She says “I want to maintain the spring in my step on my way to the office and remain excited about our life-changing work for the most underserved communities.  I don’t want to burn out at the exact moment when I have the skills and tools in my career to make a deeper impact and when Destiny Arts Center is poised for national impact.”