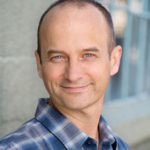 In 1992, Patrick Dooley founded Shotgun Players to make great theatre accessible. More than 25 years later, Shotgun Players continues to deliver on that vision, staging bold, ambitious performances that are affordable for all ages, launching the careers of working and young artists, and nurturing the next generation of theatre-lovers. Each year, more than 100 local artists perform six main-stage productions. Shotgun Players also advances social justice through the power of the creative arts, challenging audiences to re-examine their lives. Shotgun is recognized by the arts community as punching way above its weight in terms of artistic risk and engagement of its Berkeley community.

Patrick is a bold, visionary leader who has transformed Shotgun Players from a small, scrappy grassroots theatre company into a highly-respected cultural organization that’s here to stay. In 2004, he secured the Ashby Stage as a permanent home for Shotgun Players, and three years later made it the first fully solar-powered theatre in America. He has further contributed to his community by offering rehearsal space and fellowships to young, diverse artists, and by serving as immediate past-Chair of the Berkeley Cultural Trust, where he helped double City of Berkeley arts funding. Patrick received a B.A. in English from Virginia’s James Madison University, where he was a founding member of the American Shakespeare Center.

Having run Shotgun Players for more than half his life, Patrick says, “It feels like an important time to step back, take stock, and imagine what could possibly be in store for this next leg of my journey.” During sabbatical, he plans to spend time with his family, travelling abroad with his wife and three young daughters. He’s also excited about the opportunity to distribute leadership responsibilities among his dynamic team during his absence.

“I look forward to returning with a new perspective that will spark more creativity,“ Patrick says. “We’re producing work that is way beyond the expectations for a theatre of our size, and nothing engages me more than doing what others say is impossible.”