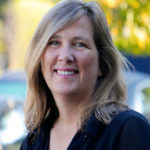 Diane Dodge has committed her life’s work to equity in education. Prior to joining East Bay College Fund, where she has served as Executive Director since 2011, Diane was an English as a Second Language teacher for 17 years, Executive Director of Seven Tepees in San Francisco for seven years, and Associate Executive Director of the Berkeley YMCA. She also developed three college access programs that still support youth around the Bay Area today.

East Bay College Fund works to break the cycle of generational poverty in Oakland’s most disenfranchised communities by helping young people attend and succeed in college. Under Diane’s leadership, East Bay College Fund has expanded the number of students served by over 400% and increased the annual scholarships awarded to over $1,000,000.

“Inequity in our society is directly linked to the college gate, and the work we are doing is more needed than ever,” she says. “Our students are successfully completing college at four times the national average because we’re linking scholarship money to mentoring, counseling, and peer support.”

East Bay College Fund is now leading the Oakland Promise, a cross-sector collaboration with Oakland Unified School District and the Oakland Mayor’s Office, to ensure that all Oakland students have the expectations, resources and skills to complete college. Partnering with two- and four-year colleges, East Bay College Fund will scale its services to triple Oakland’s college graduation rate in eight years. “At the end of the day,” Diane says, “our success comes from having a deep understanding of community needs, then reaching for a big vision and being creative in accomplishing that vision.”

When Diane embarks on her three-month sabbatical, in January 2017, she will have completed the two main phases of the Oakland Promise, so she sees the short break as a perfect opportunity to reflect and rejuvenate. “As we grow, staff leadership is a crucial part of our organizational development,” she says. “This sabbatical is an award for the entire organization, and the management team is excited for their own professional growth as they lead during my absence.” Diane’s sabbatical plans include meeting up with a friend who is sailing around the world. “It’s a life adventure completely outside of my work,” she says.