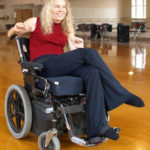 Under Judith Smith’s direction, AXIS Dance Company has become one of the world’s most acclaimed ensembles of performers with and without disabilities. Judith expanded AXIS’s repertoire from in-house choreographers to commissioning works by some of the nation’s best choreographers and composers. She also grew AXIS’s education and outreach programs. AXIS has toured across the nation and around the globe, has received seven Isadora Duncan Dance Awards, and has been featured twice on FOX TV’s So You Think You Can Dance. Judith has received numerous awards for her work with AXIS, including KQED’s Local Hero Award and an Isadora Duncan Dance Award for Sustained Achievement in 2014.

“We spent many years convincing the field that this was dance and not ‘just therapy,’ and that this combination of dancers was not limiting but rather radically expanding movement possibilities,” Judith says. “Now, I’m focused on working as a field to support careers for disabled dancers and moving the field of physically integrated dance forward. I also want to test the limits of what a dance company can do as an agent of social change, and what I personally can do to steward and inspire that work.”

Judith’s sabbatical plans will keep her close to home: gardening, raising butterflies, and spending time with family and friends. She’s also glad to have the time to connect to a lifelong love: horses. A champion equestrian before she was disabled in a car accident at age 17, Judith is now actively involved in thoroughbred racehorse rescue and carriage driving with her team of Percheron horses. “I’m excited about where we are going as a company. I am excited about this next phase of our growth,” says Judith. “I want to take this break to gather my thoughts, rebuild my energy reserves, and think about the possibilities that could shape how we proceed.”